Joseph Antoine Ferdinand Plateau was famous Belgian physicist and mathematician who is the first inventor of phenakistiscope. His research on visual perception laid the foundations of film.

Joseph Antoine Ferdinand Plateau (October 14 1801-September 1883) was famous physicist and mathematician and born in Brussels which is situated in Belgium. He was famous due to the first people to demonstrate the illusion of moving images. Joseph Plateau used counter rotating disks in small increment motion of repeated images on one and equally spaced between the images.

He gave the name of this device is phenakistiscope in 1832. The phenakistiscope was commercialize as a toy very soon and new featured a cylindrical drum instead of disc.

Who is the father of Plateau?

Antoine Plateau was father of Joseph Antoine Ferdinand Plateau and born in Tournai. He was already could read, when he was at the age of till six. His father and mother was dead, when he was at the age of only fourteen and by the trauma, he made fall ill. In primary school, he was take more interest in the lesson of Physics and much increase the interest by experiments.

He with his uncle spent the school vocations in Marche-Les-Dames. Plateau take much interest in science when he studied in secondary school but his uncle want to do study of law at Liège University. Plateau decided he would study in science at that time.

Joseph Plateau was moved to a village near Waterloo just before battle broke out in 1815. He and his siblings fled into the forest, and he later wrote about how he hunted butterflies there.

When Plateau School as a Teacher

Plateau join a Atheneum school as a teacher of mathematics in Brussels. He got a degree of graduation as a doctor of mathematical and physical science in University of Liège in 1829. Plateau do experiment in 1829 by looking toward the sun for more than 25 seconds and he became blind for some days.

For years afterwards, he often saw brightly colored halos around light sources. He started torture by the symptom disease in 1841 which he became totally blindness in just two year. Plateau was appointed as a Professor of Physics and Applied Physics in 1835 at Ghent University.

Joseph Plateau got marry with Augustine–Thérèse–Aimée–Fanny Clavareau in August 27 1840 and born a son one year later. Plateau became member of Royal Netherlands Academy of Arts and Sciences in 1872. 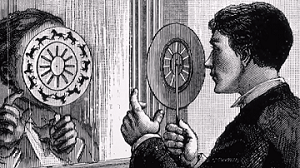